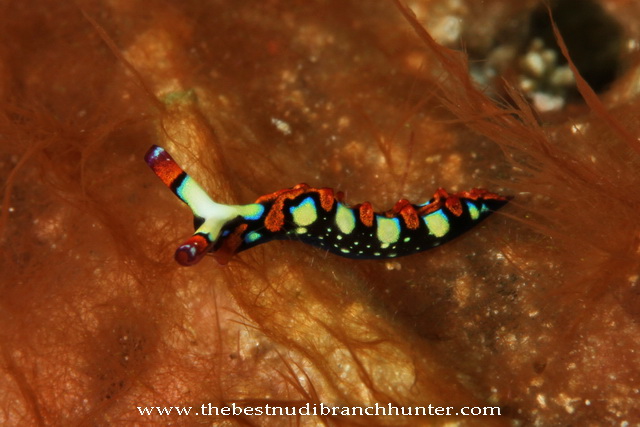 The dorsal part of the head is yellow, sometimes with a white centre, and the sides are black with yellowish spots. The rhinophores are similarly coloured to the edge of the parapodia. The basal part of the rhinophores are yellow, then there is a bright blue band, with a zone of green where the blue and yellow merge. Above the blue band is a thin black band, and above that, the upper third of each rhinophore is orange-red, often with a white-spotted patch of black right at the tip. The parapodial edge is thrown into prominent folds. Then parapodia are black with a pattern of bright colours. At the edge of the parapodia is a broad orange-red border, which at intervals extends down into the black as an orange ‘tongue’. Between the orange ‘tongues’ are large bright yellow quadrangular patches which have a bright blue band outlining the sides and top of each patch. As with the rhinophores, there is usually a green diffuse zone where the blue and yellow pigments merge. The rest of the black parapodia has scattered white or yellow spots of various sizes. The colour pattern is quite variable. The most noticeable variations are that the yellow can be a whitish cream, and the large yellow patches can merge into broad submarginal band.