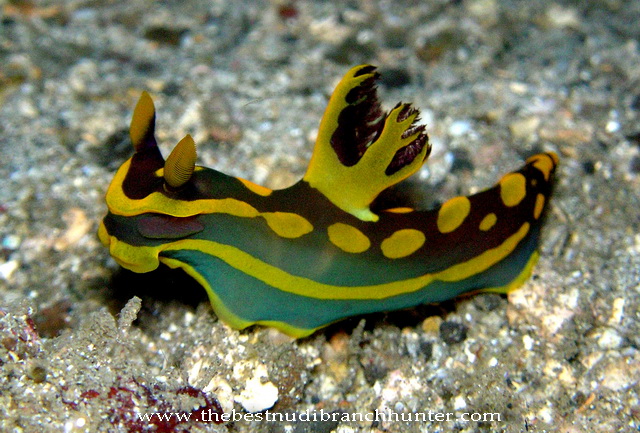 The background colour is dark green, (appearing almost black in some individuals) with a pattern of bright yellow or orange spots and /or longitudinal bands. Sometimes some of the yellow spots can be bluish green. There is a broad yellow band around the anterior edge of the notum which extends down each side of the body to just behind the gills where it breaks up into a series of elongate patches down the posterior sides of the foot.  In the dorsal midline between the rhinophores is a large yellow spot, which can sometimes be milky blue-green. Midway between the rhinophores and the gills, there is usually another yellow spot in the dorsal midline. Behind that, the gills sit in a large coloured patch, which is yellow around the edge but usually blends to milky blue-green  against the gill bases. Behind the gills, there are yellow patches of irregular shape and size.

The three large tripinnate gills are dark blackish green with a milky blue-green line up the inner and outer rachis.  There is a broad yellow band running along each side of the body, and another bordering the edge of the foot. The raised rhinophoral sheaths are dark green. The rhinophoral clubs are bright yellow with a dark green region on the posterior side of the base. Can reach about 8 cm in length.