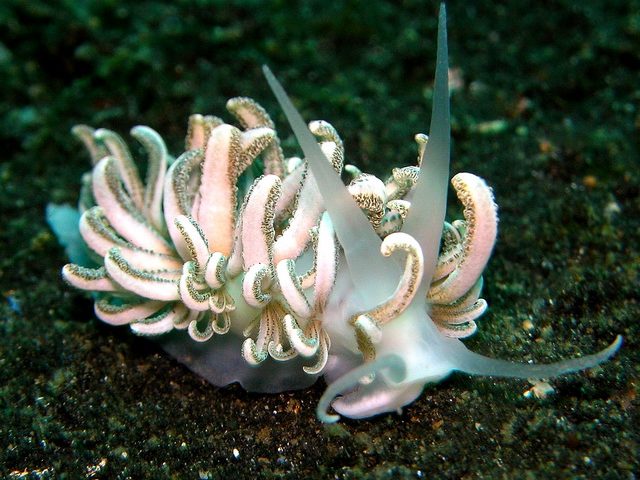 DISTRIBUTION
Only known from the type locality in Lembeh Strait, Sulawesi, Indonesia.

The body, including oral tentacles, rhinophores and foot is translucent white, with the viscera showing through as white and yellowish masses. The basal section of the cerata are also translucent clear with the brownish digestive gland showing through. The rest of each ceras is covered with an opaque white dusting except the pustulose regions, especially at the edges where the brown clusters of zooxanthellae show through. Just behind the rhinophores a brown transverse line can be seen which is the branch of the digestive gland running to the anterior right ceratal arch. Phyllodesmium lembehense is elongate and has been found up to approximately 23 mm in length. The oral tentacles and rhinophores are smooth and tapering, the oral tentacles being slightly longer. The anterior foot is extended into angular foot corners. There is a distinct raised anal papillae situated dorsally in the intrahepatic space between the first and second ceratal clusters on the right side

The cerata appear to be arranged in arches as found in P. hyalinum and P. crypticum. The cerata are dorso-ventrally flattened with the basal half of each ceras being ovate in cross-section. The upper half of each ceras is more flattened and nodulose, the nodules being most concentrated along the edges. The ceratal digestive gland consists of a central duct with branches radiating out towards the ceratal wall. Zooxanthellae are present in the digestive lumen and in the cells. The jaw plates and radular teeth are similar to those of P. jakobsenae and other xeniid feeders.

All specimens were found with xeniid colonies, and like other xeniid feeders they are well camouflaged in colour and ceratal shape. Individuals of P. lembehense were seen to enlarge their cerata and hold them close together while resting, shading the rest of the body. As typical for specimens of Phyllodesmium, several specimens autotomized some of their cerata, and the discarded cerata exuded a sticky secretion and moved for some minutes.