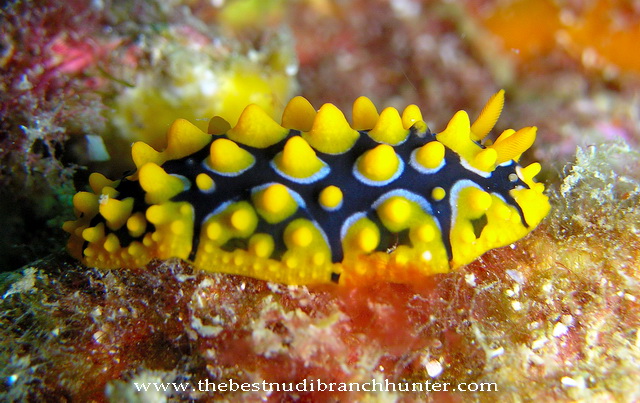 DISTRIBUTION
Common throughout the tropical Indo-West Pacific Ocean, including the Red Sea.

The most typical dorsal pattern consists of four to ten black rings bordered in white, each with a central gold or white tubercle. There is little ontogenetic variation in external pattern (i.e., juveniles resemble adults), however considerable individual variation in dorsal pattern occurs in this species. From the basic pattern described, there appear to be numerous related and irregular patterns where the black areas expand and/or meander across the dorsum. One of these forms was described as “P. ocellata undula” by Yonow (1986). The “undula” form is intermediate in this respect. Some specimens collected in southern Thailand had a dorsum with a mostly black background and yellow tubercles, but little or no white.

Phyllidia ocellata can be separated from other predominantly gold-yellow Phyllidia species. It appears to be closest in colour to Phyllidia flava, but P. flava does not have any black pigmentation. Phyllidia varicosa, Phyllidia tula, and Phyllidia coelestis have yellow capped tubercles, but all have blue-grey pigmentation and the former two have a black stripe on the foot sole.