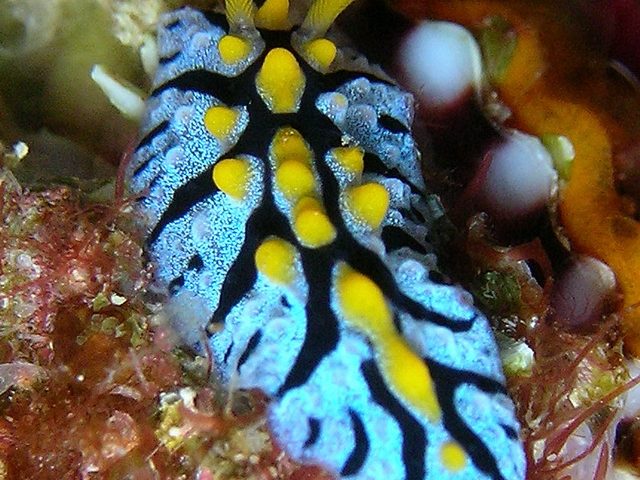 DISTRIBUTION
Known from coral reefs in the Indian Ocean from northern Western Australia to eastern Africa.

Notes compiled from Brunckhorst, 1993: P. marindica is predominately blue-grey in colour with two longitudinal black bands running the length of the mantle, one on each side of a single median blue ridge. The median ridge has a single row of yellow capped tubercles. There are also many black rays or lines, on either side of the mantle, running at right angles to the mantle edge. There are 20-23 lamellae on each of the yellow rhinophore clubs. The ventral surface of mantle and the foot are grey, as is the anal papilla. Phyllidia marindica appears to be closest to P. menindie which is found in the western Pacific Ocean.
However, P. menindie is more oval in shape, possesses large, broad based tubercles which are gold capped and tall rhinotubercles. For specimens of similar size, P. menindie possesses fewer lamellae on each rhinophoral clavus, has three low, mid-dorsal ridges (P. marindica has one) and blue crescentic areas on the mantle margin. Ventrally, P. menindie is paler and it has an anterior indentation on the foot. Internally, the foregut of P. menindie is white whereas that of P. marindica is cream with a dark band. This species has often been confused with Phyllidia rueppelii Bergh, which is considered by Brunckhorst to be confined to the Red Sea. It is also likely to be mistaken for the widespread Phyllidia varicosa but in that species there are always three or five longitudinal ridges on the dorsum, and of course the anus opens in the dorsal midline.