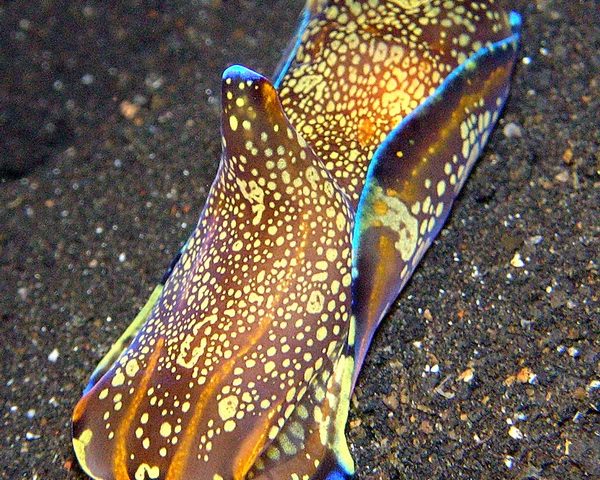 Philinopsis cyanea, is quite a variable species found throughout the tropical Indo-West Pacific. It varies in colour from plain black to black with blue, white, yellow or brownish-yellow markings. Sometimes animals have a pale brown background colour. Juvenile animals are often more colourful than adults. In the picture alongside, of a juvenile animal from Komodo national park 14/02/2008, you can see the characteristic shape of species of Philinopsis. The posterior edge of the headshield has a tapering crest, which stands erect, and the body is cylindrical in shape. Species of Philinopsis are usually found burrowing through sand or mud. They have lost their radular teeth.

There are two quite distinct groups in the genus, one with a large eversible buccal bulb like Philinopsis cyanea, and a second with a long tubular pharynx like Philinopsis gardineri. The group with the large buccal bulb feed on other bubble shells, such as Bulla, Atys and Haminoea. They feed by partially everting their large muscular buccal bulb, (or pharynx), to envelop their prey which they swallow whole. After digestion, the empty, unbroken shell of the prey is regurgitated, being too large to pass through the gut. Species of Philinopsis, when collected, often spit out two or three clean, unbroken bubble shells.

I remember once in Zanzibar collecting some animals from sea grass beds where the bubble shell Bulla ampulla was also abundant. The Philinopsis ranged in length from 30-70mm and within 2 to 3 hours all had regurgitated 3 to 5 Bulla shells ranging in length from 5-15mm. They clearly have quite an impact on the ecology of their neighbourhood.

Philinopsis speciosa was first reported from Hawaii. The original description of this species, the type of the genus Philinopsis, records the external features and the color:
“Colour above- fawn, spotted and speckled with white; margins more or less varied with blackish and yellow; sides paler. Foot purplish fawn, and closely freckled with whitish, and broadly margined on both sides with the dorsal colours intermixed.”
From colour photographs now available, the colour description can be extended. The ground colour of the animal ranges from light translucent brown to an opaque dark brown or even black. There are a pair of yellow to orange-brown parallel lines on the headshield on either side of the midline, and sometimes traces of a second line on each side, further out, similar to those sometimes present in P. cyanea. The white spots range from quite small to very large, the large white markings being somewhat broken by brown speckling. The margin of the parapodia is colored with black, blue and orange-yellow markings, which can sometimes form lines. The foot appears to be of similar colour to the dorsal surface. The colour is extremely variable, and parts of the pattern can be absent in any specimen.

From an earlier investigation Bill Rudman says there are no anatomical features distinguishing P. speciosa from the widespread Philinopsis cyanea, a species which is widespread throughout the Indo-West Pacific and shows an identical range of colour variation. In that earlier study I did not know there was a black colour form and so accepted the prevailing view that P. speciosa was endemic to the Hawaiian Islands, a species with similarities in colour to the SE Pacific Philinopsis taronga and the NE Pacific species P. gigliolii. It would appear that P. speciosa is a widespread Indo-West Pacific species which has been identified in most places as P. cyanea.  As  P. speciosa is the older name, and the type of the genus, it should replace the more commonly used P. cyanea.

The position is probablly more complicated. I am not quite sure what we should do with Philinopsis depicta from the Mediterranean. I have long felt it was probably the same species as the Indo-West Pacific P. cyanea (or rather P. speciosa).