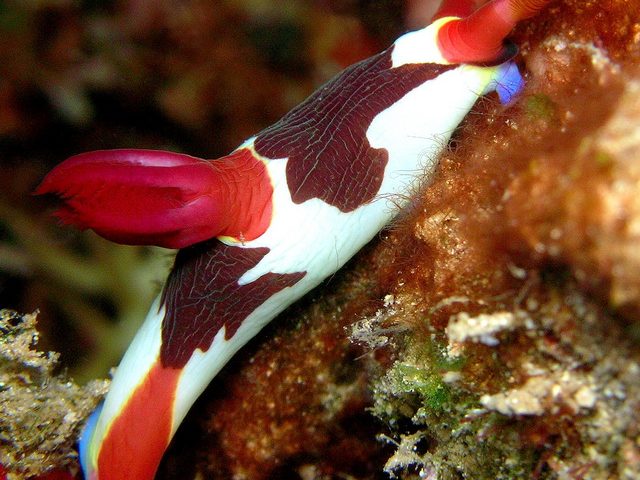 This beautiful Nembrotha has a curious history. It was described in 1931 by Pruvot-Fol from a painting done in 1892 by an artist named William Saville-Kent. There are no type specimens to back the description up and no mention of any aspects of the internal anatomy of course. Although the species is valid and common in parts of the Indo-West Pacific where the painting was based, a taxonomist could never get away with such a description today. To insure that scientists describe new animals in a standardized and reproducible format, new species descriptions must adhere closely to a long and detailed list of specific rules published in the International Rules of Zoological Nomenclature.To confound the matter of lack of descriptive characterization, Nembrotha c.f. rutilans is one of several similarly colored species forming a co-occurring colour complex. Among the species included in this complex are Nembrotha chamberlaini, Nembrotha purpureolineata and a couple new species shown on Bill Rudman’s Sea Slug Forum. Danny’s photo shown above is a typically colored N. rutilans, with creamy-white body, large brown patches anterior and posterior to the gills, orange-red patch on the tail, long red rhinophores and very large red gills. This species feeds on the slowest moving of benthic invertebrates, a sessile tunicate. Reaching 120 mm in length, this species is known from eastern Australia, and throughout Indonesia.
Recently the subfamily Nembrothinae was revised and the name Nembrotha rutilans changed into Nembrotha purpureolinata.