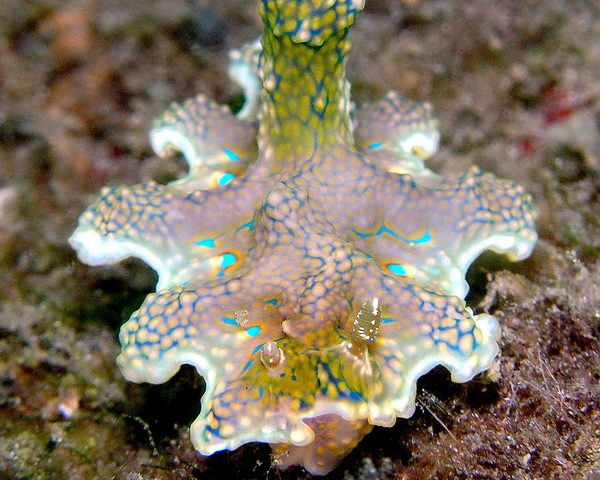 DISTRIBUTION
Found throughout the tropical and subtropical Indo-West Pacific.

This has just got to be the most outrageous nudibranch on earth, and the one that wrote the book on flamboyant aposomatic coloration. Many of you still refer to this species as Miamira sinuata. The species has been recently reassigned by Valdes & Gosliner (1999) who proposed that this gorgeous beast is a member of the chromodorid genus Ceratosoma. Because the color of animals varies greatly ,this species has been the center of much discussion and numerous differences of opinion concerning whether or not there is one, two or three species represented here. On one hand I completely agree with Bill Rudman who states on the Sea Slug Forum “the number of species in the ‘Miamira-group’ is still not clear. Some authors, such as Baba & Hamatani (1974), consider there is a single species which ranges from the green ‘sinuata’ form to the purplish ‘flavicostata’ form. Others consider there are sufficient distinctions in external shape and colour, and radular morphology, to distinguish two or three species. While the extremes are very clear, there are many intermediate forms which suggest perhaps a continuum. At present I have placed them all as a single species, but this is through lack of knowledge rather than through some great insight.

On the other hand, I personally would prefer to separate the color forms as distinct, and given my choice I would call the critter in Danny’s photo shown here, Ceratosoma magnifica.

Because to the controversy over whose who, it is difficult to establish exactly what the range of this species is.

In addition to the several submittals found on the Seaslugforum.net pages, the variation of this species can also be seen on page 93 of Suzuki’s Opisthobranchs of Izu Peninsula , page 244 of Debelius’ Nudibranchs and Sea Snails and page 262 of Halstead’s Coral Sea Reef Guide . In these and Doug’s shot you see a smooth and dramatically ridged body, with several large central nobs, the tallest just anterior to the gill plume. The foot is bright purple with yellow spots and the dorsum red with yellow lines juxtaposed to the ridges. To me, this differs greatly from the green form whose dorsal surface is tuberculate and only slightly ridged and whose color is almost uniform green with small yellow and blue spots. Even the rhinophores and gills differ in coloration between these too.