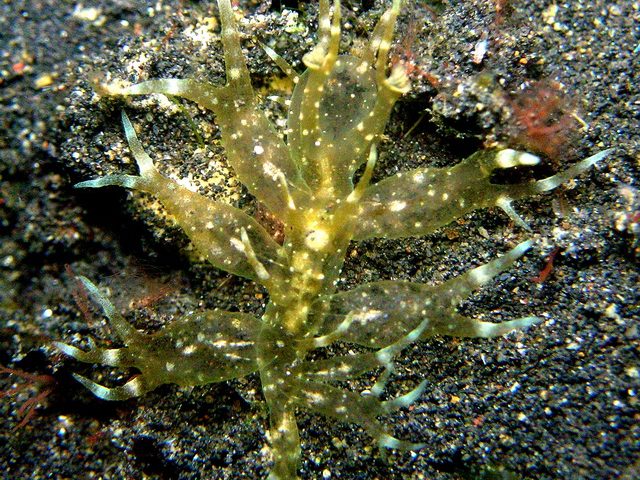 The whole animal appears translucent brown, the colour coming from microscopic algae (zooxanthellae) living in the body, and which can be seen through the transparent body wall. Some animals can have opaque whitish spots on the ceratal wall and along the edge of the foot.

Like all species of Melibe there is a large oral hood which is used in the capture of its food – small crustacea. There are also large cerata down each side of the body. As its name megaceras implies, the cerata are extremely large, or at least greatly elongated, in this species and at the tip there are two or three long pointed papillae. All over the dorsal surface, the sides of the body, and the oral hood, are long tapering unbranched papillae. All species of Melibe are rather strange in shape, but this must be the strangest of all. It reaches at least 70mm in length.

This species is found on shallow water sandflats. It holds the cerata out horizontally when it is crawling along, so that it is ‘exeedingly flat’. Its translucent brown colour, and its flat aspect, make it almost invisible on a white sandy bottom. It feeds on small crustacea. I also filmed it swimming by lateral flexion of the whole body. The egg mass is a white coiled ribbon attached to the sand by a mucous thread.