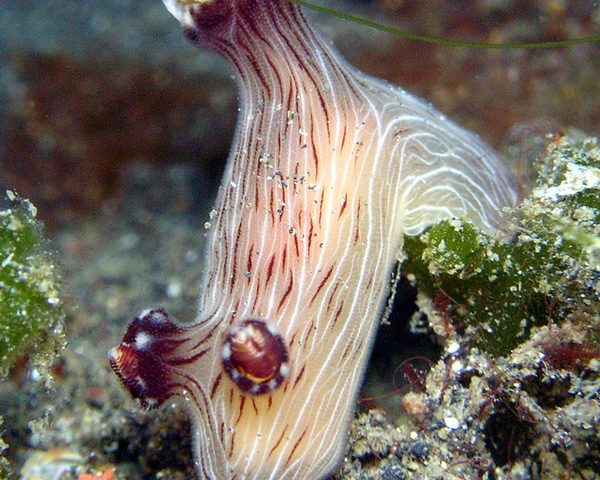 The body is elongate, narrow and very elevated. The texture is soft and velvety. The dorsum is entirely covered with long spiculate papillae (caryophyllidia), about 130 µm in length which are characteristic of that genus. The general colour of the living animals varies from cream to pale orange. Normally, the anterior and posterior edges of the notum, as well as the edges of the rhinophoral and branchial sheaths, are darker, sometimes almost black. The entire dorsum is covered with numerous longitudinal dark brown streaks. Among them, there are several yellow/orange low protuberances, which are also present in the rhinophoral and branchial sheaths. The mantle margin is wide, but stays close to the laterals of the foot. The foot has the same colour as the dorsum, with an irregular pattern of broken brown streaks and some white lines. The rhinophoral and branchial sheaths are very elevated and regular. There are seven, branchial leaves, forming a circle, posteriorly closed by the anal papilla. The branchial leaves have the same colour as the dorsum, except for the rachis, which is white proximally and dark brown distally. The rachis of the secondary and tertiary branches is also dark brown. The rhinophores are elongate, with 25 lamellae in a 38 mm preserved length specimen. The rhinophores are dark brown with the apex white. They may have dark brown spots near the apex. The egg mass is a pink convoluted ribbon.