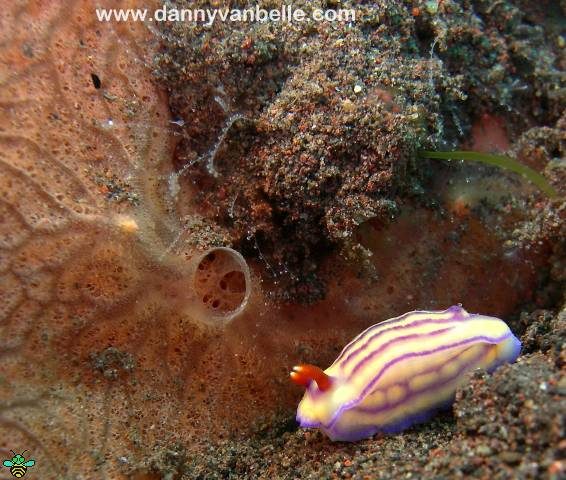 There are a group of white or yellow chromodorids with red or purple longitudinal lines, some of have been discussed previously. Hypselodoris whitei, originally described from Indonesia, is also known from Enewetak Atoll, New Caledonia and the tropical East Australian coast. A name often used for this species is Hypselodoris mouaci. It has a whitish background colour with a reddish purple sub marginal line around the mantle edge and a series of five longitudinal lines covering the rest of the mantle. These lines are usually very crooked and joined by a series of lateral connections, breaking the mantle into rows of slightly raised whitish regions. The rhinophores are orange to orange-red with a distinctive white tip and the gills are similarly coloured with white on the inside and usually at the tip of each gill. This species is very similarly coloured to H. maridadilus, from the Indian Ocean which has a more yellow background colour, and in which the longitudinal lines are distinctly purple and cross-connections very indistinct. The lines are also much straighter than in H. whitei, and the rhinophores and gills have no white markings. The specimens reported from Japan and Hawaii as H. hilaris and H. maridadilus are more similar in colour to the Indian Ocean species, but they have the white tipped rhinophores and white upper edge to the gills. The earliest name for this species is probably Doris lineata Eydoux & Souleyet, 1852, which was described and illustrated from Hawaii (Sandwich Is). However that name is preoccupied by Doris lineata Brocchi, 1819.