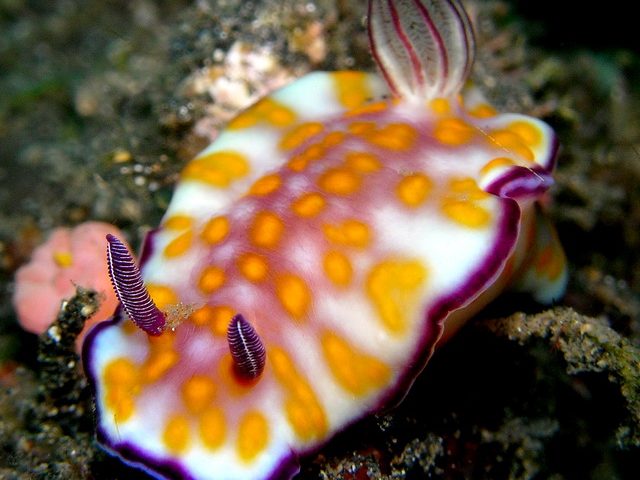 Before known as Risbecia ghardaqana

This is one of a number of similarly coloured yellow-spotted species including Hypselodoris imperialis, Hypselodoris pulchella, and Goniobranchus annulata.

Hypselodoris ghardaqana occurs sympatrically in the Red Sea, and probably elsewhere in the Indian Ocean, with Goniobranchus annulata and Hypselodoris pulchella. Some confusion has existed concerning the identity.  Gohar & Aboul-Ela (1957) reported on the anatomy and developmental biology of these three yellow-spotted chromodorids from Al Ghardaqa, on the Egyptian Red Sea coast, and it was in this publication at the seaslugforum.net that Hypselodoris ghardaqana was recognised a distinct species, which although very similar to the common Hypselodoris pulchella, differs in a few colour, anatomical and developmental differences. Rudman (1987) placed the species in the genus Hypselodoris.

Compared with H. pulchella which grows to approx 11cm, H. ghardaqana only grows to approx 5.5cm long. The ground colour of the body is white and there are no violet tinged patches. The spots on the mantle and sides of the body are yellow not orange and much fewer in number than in H. pulchella. The anterior end of the mantle is not produced into a prominent veil like H. pulchella and the mantle border is bright blue not violet. The gills are simple and although a few may bifurcate they are never as branched as in H. pulchella. They are non vibratile.’ The egg-ribbon is white when newly deposited, and the eggs are arranged in one layer rather than two.