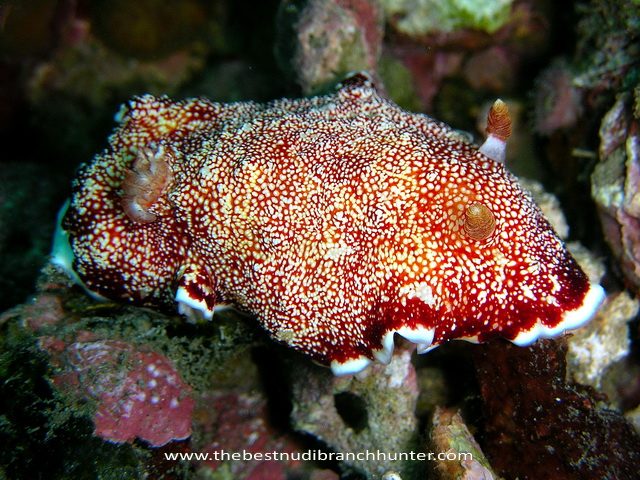 DISTRIBUTION
Throughout the tropical Indo-West Pacific.

Although initially thought (Rudman, 1973) there were differences between Doris tinctoria Ruppell & Leuckart, 1828, Doris reticulata Quoy & Gaimard, 1832, Goniobranchus reticulatus Pease, 1866, Chromodoris alderi Collingwood, 1881 and Chromodoris inopinata Bergh, 1905, extensive collections from throughout the Indo-West Pacific indicate that the species differences suggested by different colour patterns is not supported by internal anatomy. The earliest name for this species then is C. tinctoria. The main colour differences are found at the border of the mantle. Usually there is an irregular white region between the yellow border and the red reticulate pattern which covers most of the mantle. In some animals this white region is absent or can occur just around the anterior end. In others the white region is a very regular white sub marginal band, and in others small rounded patches of the reticulate pattern form red spots in the white region. Sometimes these spots are uniform red, but usually they have a red reticulate pattern. Recently its name changed from Chromodoris tinctoria to Goniobranchus tinctorius.