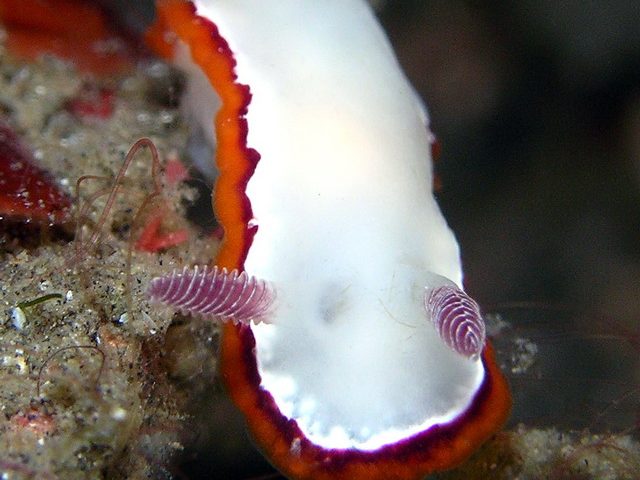 DISTRIBUTION
Known at present only from the western Pacific from north Queensland, Australia, Marshall Islands, Hong Kong and Japan.
Here in the picture a record from the Lembeh Strait, Sulawesi – Indonesia

This is one of the many species of chromodorids which are white with either red, yellow or orange mantle borders, or a combination of two or three bands. G. rubrocornuta is one of a group of species, which belong to the Goniobranchus fidelis colour group. These have an orange outer band at the mantle edge and an inner, often broken band of pink, red or purple. Its name is derived from its red rhinophores. Largest known specimen 13 mm long preserved. Some show variation in the background colour of the mantle from white to yellow. In this species it seems the edge of the rhinophore lamellae can be white. In a specimen from Hong Kong, the rhinophore club appeared a translucent red.
Goniobranchus rubrocornutus looks like a strange colour-variant of Goniobranchus fidelis, with an orange-red border of the mantle and a thin dark red line next, they differ by the colour of the gills and rhinophores: reddish purple in Goniobranchus rubrocornutus and black in Goniobranchus fidelis.
It was originally posted at these websites as Chromodoris rubrocornuta  Rudman, 1985