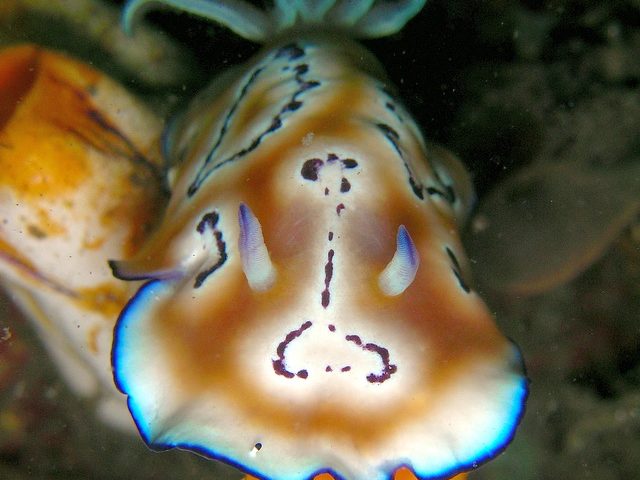 DISTRIBUTION
Tropical West Pacific, and reported below from NW Australia.

This is one of a group of similarly coloured species which I have called the “Hypselodoris tryoni colour group”. Other species include Hypselodoris tryoni, Goniobranchus kuniei and Goniobranchus geminus. They all have large purple or purple-brown spots or marks, usually ringed with white, an often reticulate brownish background, and a purple border. Goniobranchus geminus differs in having four colour bands around the mantle edge, an outermost white, then translucent greyish purple, then white, then yellow. The other three have a distinct purple line at the border, narrow in G. leopardus and H. tryoni, but broad in G. kuniei. The shape of the body of H. tryoni, high with a reduced mantle overlap, is typical of the genus Hypselodoris. The three species of Goniobranchus have a wide mantle overlap. Of the three with the purple mantle edge, G. leopardus and G. kuniei can be distinguished from H. tryoni by the broad purple border, consisting of three slightly different coloured bands in G. kuniei, and by the leopard-like multiple spots, or marks, forming a hollow square, found in G. leopardus.