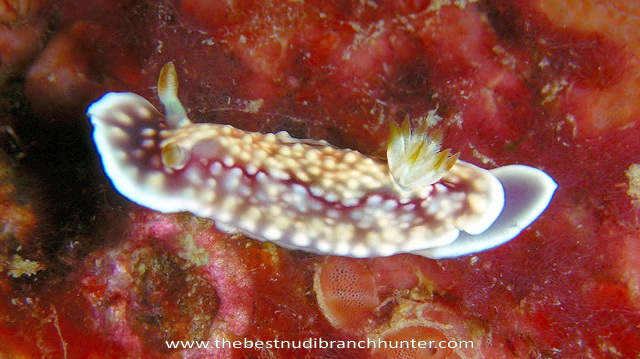 Mimics of Phyllidiella pustulosa.
Originally described from New Caledonia, there are now records from much of the Western Pacific. A very similarly coloured animal is found in the western Indian Ocean and was named Goniobranchus conchyliatus Yonow, 1984. Most authors have considered it a colour form of G. geometricus. Yonow (1994) has reported a dark, fairly “typical” colour form of G. geometricus from the Maldives in the Indian Ocean. This colour form is also reported from the Philippines.

Apart from the characteristic dorsal colour pattern, which resembles a phyllidiid, this species is one of a group with a fairly large anterior mantle skirt which waves up and down as the animal crawls along, and is purple on its underside.