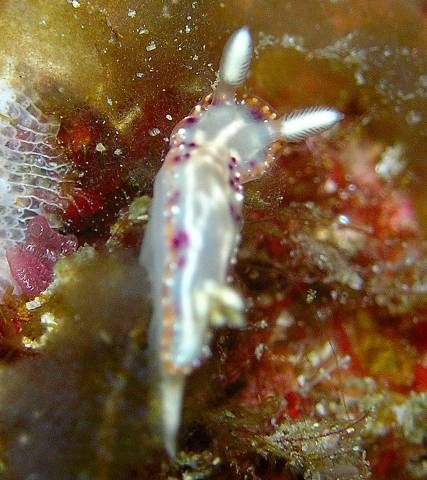 There is some variation in colour pattern and sometimes the purple spots on the orange border are few or absent.  Also, the region between the orange band and the white line encircling the gills and rhinophores varies from being as unpigmented as the central region to almost as heavily pigmented as the white line.  In other specimens the Y-shaped white line and the encircling white line can be scattered with purple spots, and in others the Y-shaped line can be broken or have extra branches.

However, in all specimens studied the basic colour pattern can be found with an orange border, a white ring running around the mantle just outside the gills and rhinophores, a white median line bifurcating midway down the body to form a loop around the gill pocket, and a row of large diffuse purple spots between the orange border and the thin white outer ring.

The mantle is elongately ovate with a wide mantle overlap. The simple gills are arranged in a circle, open posteriorly, around the anus.  Large dendritic mantle glands form a submarginal band all around the edge of the mantle beneath the orange margin.