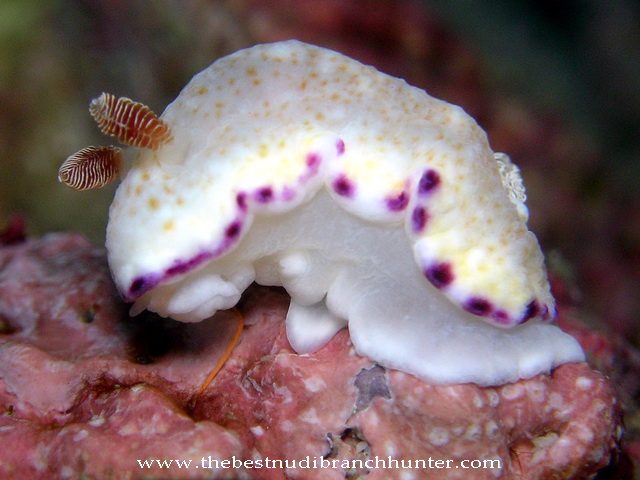 DISTRIBUTION
This species is known only from Hawaii and the Marshall Ids, but messages on the Seaslug forum suggest it may be synonymous with G. aureopurpurea, G. alius, and G. rufomaculata, which would give it a wide Indo-West Pacific distribution.

The mantle is pale yellow with slightly raised opaque white pustules, and the mantle is bordered with either a continuous purple band or broken into a series of purple markings. Scattered on the yellow background colour, between the white pustules, are diffuse, darker yellow spots. The rhinophores stalks are transparent and the clubs are purplish brown with opaque white edging. The gills are arranged in a goblet-shaped cluster and are usually translucent with opaque white edging. The underside is all white.

This white and yellow-spotted chromodorid belongs to a group of 4 species of Goniobranchus, G. aureopurpureus, G. alius, G. rufomaculatus and G. albopustulosus which are most probably colour forms of one species. This is an interesting example illustrating the problems facing taxonomists when they try to interpret old descriptions and the immense value in studying local faunas and local variation within a species in great detail.

All forms have rhinophore clubs which are dark brown or purple with white edging. The gills, which are held in a goblet shaped cluster, have an opaque white edging. No major anatomical differences can be found between the species. It is still possible that one or more of these ‘species’ may be a very close mimic. What we clearly need to do is to build up more information on their biology, what their egg ribbons look like and what sponges do they feed on.