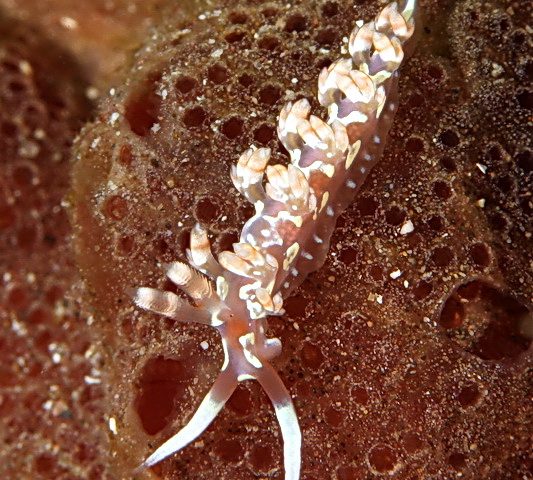 In the original description of F. engeli the colour of the living animal was only scantily described. “transparent pinkish white body with scarce brown pigment granules. .. cerata light brown, each with darker brown ring. Opaque white spot between tentacles, one on each side behind them, streaks and spots between the footstalks of the cerata, and a dorsomedial stripe along tail.”. Triangular opaque patches of unknown colour are shown on the side of the body between the ceratal clusters in Marcus’ drawings of the preserved animals which correspond to the orange patches in the attached photos. Also in Marcus’ drawings a submarginal row of spots can be seen along the foot. From Linda Ianniello’s photos these can be seen to be white. From the original description, the subsequent description by Edmunds & Just (1983), and Linda Ianiello’s photos the colour can be summarised as follows. (Source : seaslugforum)

Body translucent with opaque white markings. There are usually white bands on each side running between the ceratal clusters, and a white band along the dorsal midline of the posterior foot. There can also be a white patch on each side of the head and anteriorly between the oral tentacles. The oral tentacles are white except at the base where they are translucent clear. In some cases the white bands are broken into a more irregular pattern of white streaks. There are usually orange or yellow triangular patches on each side of the body between the ceratal clusters. There is a submarginal row of opaque white spots along the foot. The cerata are translucent with a brown or orange band about a third the way down from the tip. The rhinophores are lamellate and the animal grows to approximately 20mm.