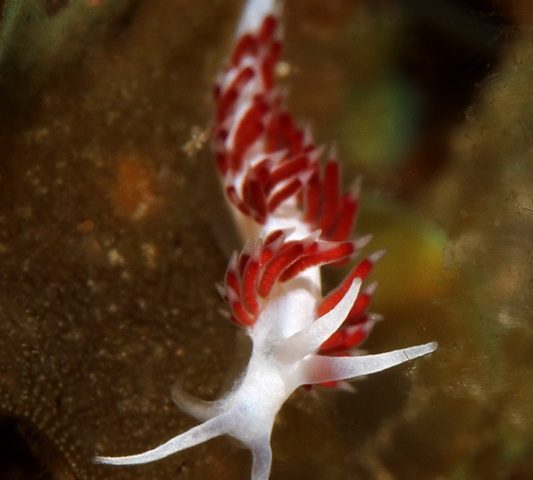 Note: Formerly known on the seaslugforum as Flabellina sp. 5.

Small flabellinid with opaque white body, oral tentacles and rhinophores. Ceratal wall transparent but digestive gland duct rages in colour from red to bright orange yellow. In some animals with a an orange or yellow digestive gland there is a deeper orange or red band at the upper end of the digestive gland duct giving the cerata the appearance of a having a subterminal orange-red band. The rhinophores are relatively short, smooth and taper to a rounded tip.

This species has also been reported from the Bahamas (Redfern, 2001) as Flabellina sp. B. It has recently been redescribed as Coryphella dushia (see Ortea, Caballer & Moro, 2004) from material collected from the Canary Islands and Cape Verde. Marcus & Marcus’s original description is very brief, and the colour is described as ‘white, without lines or other marks; the diverticula of the digestive gland from orange to brown ‘. Although this is not much to base an identification on, Ortea, Caballer & Moro’s animals match the original description in shape of the radula and general arrangement of the cerata.