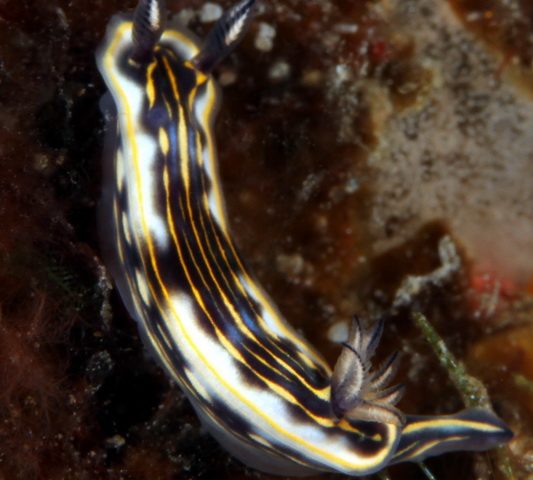 Originally described from Barbados as having a blue black mantle with a white border broken about midway down each side by the widening of the bluish background colour in this region. There is also a yellow submarginal line around the mantle edge, and a variable number of longitudinal yellow lines down the mantle, the number of lines increasing with the size of the animal. There can also be scattered blue spots. The rhinophores are dark blue with a white vertical line on the upper anterior and posterior edges, the posterior one being twice a s long as the naterior one. The gills tralnslucent clear in juveniles, become white in adults. There is a dark blue line along the inner edge of each gill. Grows to at least 25 mm long but there are few published records of this species. Humann (1992) reports that it feeds on the blue sponge Dysidea janiae.