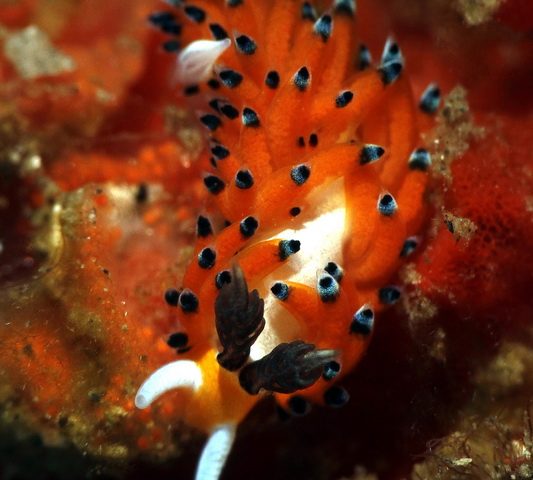 DISTRIBUTION
Originally described from Japan and found uncommonly in eastern Australia down to about Sydney. I have also found it in New Caledonia so it probably a wide western Pacific distribution.

Body and oral tentacles opaque white. Cerata wall translucent, but digestive gland duct is orange with a black tip, giving the species its characteristic colouration. The rhinophores are black and have three ‘cup-shaped’ or ‘collar-like’ swellings. When first described, the rhinophores were said to have 2 large swellings but in a subsequent description the authors described specimens with these cup-shaped swellings. To accomodate their earlier account they suggested the shape of the rhinophores was variable in this species, but I know of no subsequent reports of a similarly coloured animal with two swellings on the rhinophores. Species of Favorinus eat other opisthobranch eggs. In most species, the colour of the ceratal digestive gland is dependent on the colour of the eggs they are eating. In Favorinus tsuruganus however, the cerata are consistently yellow-orange with a black tip.