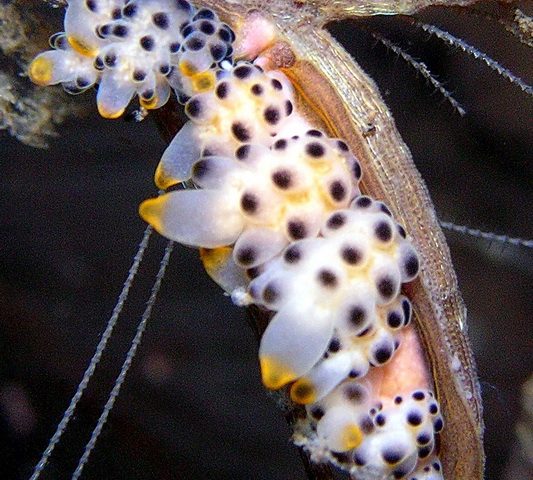 Still to be described

This is a species of Doto. It has similarities to two species described from Japan, Doto japonica and Doto bella which both have a black spot at the tip of each ceratal tubercle. However neither has been reported to have the ceratal tip capped in yellow like in these animals. It is possible the egg masses in the background belong to this Doto but unless you actually see them producing them you can never be sure. Another nudibranch could have been past in the last few days and decided that this was a nice spot to lay some eggs. Species of Doto look and behave very much like aeolids. They have aeolid-like cerata and they feed on hydroids like many little aeolids. They are however more closely related to the soft-coral feeding tritoniids. Unlike aeolids they do not have cnidosacs at the tip of their cerata to store nematocysts from their cnidarian prey.