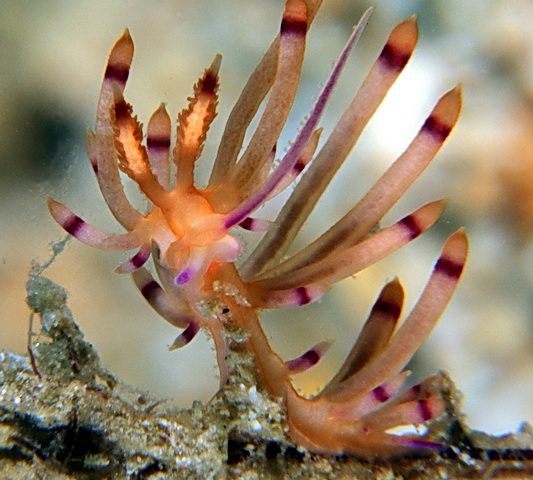 DISTRIBUTION
Tropical and subtropical Indian and Pacific Oceans.
Before known as Flabellina rubrolineata

Coryphellina rubrolineata, as its name suggests it usually has red longitudinal lines on its body, one down the centre of its back and one down each side of the body just below the cerata, but these lines can sometimes be broken, or in this case totally absent. The red-lined ‘flabellina’ (Coryphellina rubrolineata) is a relatively small sized aeolid nudibranch growing not much more than 4 cms in length. The stretched out body has a sharp end at the tail, the dorsal side is covered with a certain amount of extensions called cerata, which size vary from an animal to another. Rhinophores are pointed et look like feathers. The oral tentacles are thin , cylindrical and longer than rhinophores . The coloration is variable and here’s a description for the two main coloration which can be easily met underwater:

– The classic coloration: the body is milky white to translucent, three reddish to purple continuous or dotted lines are running on both side and in the middle of the body,oral tentacles and rhinophores are whitish with a mauve to purple ring at the two third of their extremity, cerata are also whitish with a purple ring and with orange tip.

– The purple coloration: whole body including cerata, rhinophores and oral tentacles are purple to mauve, without any continuous reddish line on the body but with just a darker ring at the two third of the cerata with clearest tips.
Distribution & habitat

Coryphellina rubrolineata can be found in tropical, subtropical and temperate waters in the Indo-Pacific area, Red Sea and also as a migrant species in the Mediterranean Sea. It is also commonly observed on shallow reef or rocky slopes rich in hydroids which represent its main diet. Like mainly all aeolids, Coryphellina rubrolineata has the ability to store the stinging cells from cnidarians eaten. This stinging cells stock is a particularly effective means of defense and is located at the ends of cerata, it is contained in cnidosacs.