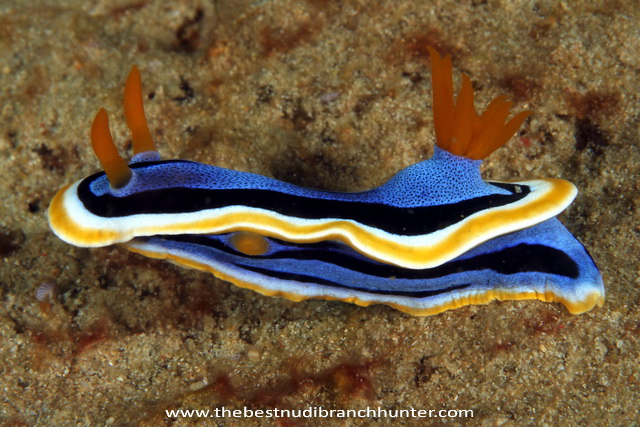 DISTRIBUTION
Tropical western Pacific and perhaps into the Indian Ocean.

Chromodoris elisabethina is one of a group of Chromodorids with a blue or bluish-white background colour and black or dark blue longitudinal lines. Often they have orange or yellow gills and rhinophores and a similarly coloured mantle border. The upper photo could be considered the “typical” colour pattern, but the orange border can be somewhat faint, (and apparently sub marginal), and the median black line can be replaced by an irregular group of shorter lines. Chromodoris annae is one of the most similarly coloured species. It usually does not have a median black line and the blue areas of the mantle are not the uniform blue of C. elisabethina but have scattered darker specks, almost pits, throughout the blue areas.