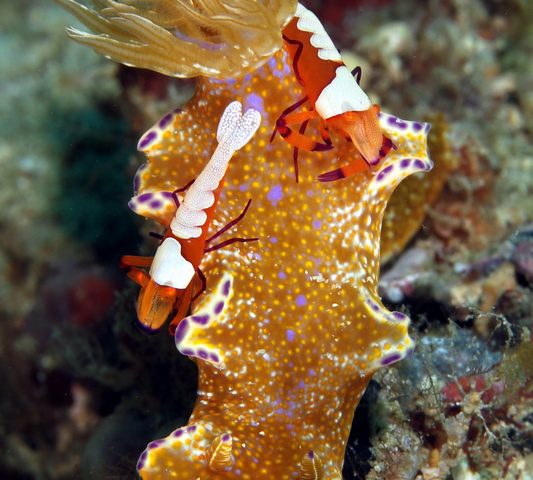 The two common tropical species of Ceratosoma, C. tenue and C. trilobatum, are variable in colour, and as both can have very similar colour patterns, considerable confusion has occurred in the past over the identity of specimens. Ceratosoma tenue can be characterised by the three mantle lobes on each side of the body. There is a large anterior lobe on either side of the head and a large lobe on each side by the gills. Between these is a smaller lobe which is joined by a ridge to the gill lobe, but not the head lobe. The edge of the lobes and the ridge joining the posterior lobes is usually outlined with a broken purple line. There is usually no broken purple line between the head lobe and the posterior lobes. Colour variation is very similar to that of C. trilobatum. It does appear that the purple border to the mantle and foot in C. tenue is always a dotted line whereas in C. trilobatum it is usually an unbroken line. Although this species can grow to more than 120mm in length, it is relatively smaller and more elongate than C. trilobatum.

Most species of Ceratosoma have a long recurved dorsal ‘horn’ which acts as a defensive lure attracting potential predators to the part of the animal which contains most of the distasteful chemicals stored from their food.