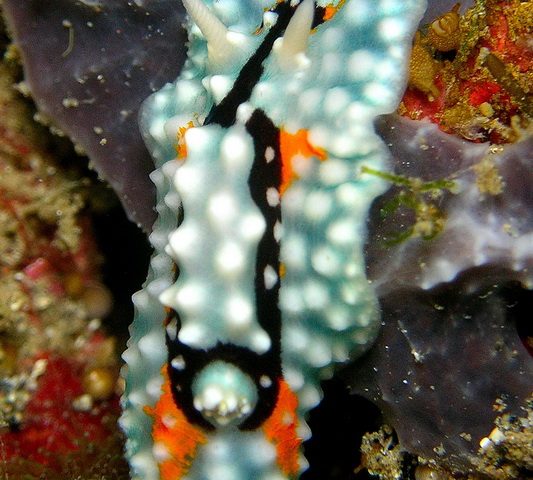 The dorsum of the living animal is a translucent bluish gray, darker at the edges of the mantle and lighter towards the middle of the body. The mantle is covered by numerous white rounded tubercles, and has a distinctive black pattern, which is virtually identical in all specimens examined. There is a black elongate patch in front of the rhinophores. From this patch there is a thin black line running back between the rhinophores to link to a black rectangular mark which runs back to just enclose the gills. A secondary black line runs across the front of the gill pocket.  There is also a pattern of yellow-orange markings on the mantle, associated with the corners of the black rectangular pattern. The rhinophores are translucent off-white and lamellate, containing 18 lamellae in a 21 mm long specimen. The gills are similarly coloured and range from 6-9 in number. They are bipinnate and relatively sparsely branched.

Each rhinophore is surrounded by four tubercles. These tubercles also alternate large and small with the larger tubercles on the left and right sides of each rhinophore. The anterior portion of the foot is grooved but not notched. The head has short oral tentacles with a short groove along their outer edge. Grows to 22mm long.